Good Morning and God bless you,

Well it is at least morning for Nancy and I, depending on where you are in the world, it could be for you yesterday’s Good Evening or Good Night, maybe even Good Afternoon as it would apply to the West Coast of California. So in most cases you are reading the thoughts from one who is in the future speaking into the past. Interesting thought, isn’t it? Have you ever had the thought that if you could live a day over again, you would do something different? Well it seems in some respect that we, Nancy and I, have had that opportunity a number of times, for when we leave Africa or the Philippines going to the States, more often than not we go back in time at least 6 to 14 hours or more, depending on where in the world we may of be. I am not so sure that we are cognizant of it, for the reason that whether you are in the present or the future, you are always taking your current state of mind with you. It is a thought that one needs to meditate on, especially when you think of the scripture that says that we are to redeem the time.[1]

Perhaps we should have a bit of a Greek lesson here; the word Redeeming comes from the Greek word G1805 ἐξαγοράζω or in English exagorázō; fut. exagorásō. This particular word is the combination of two words. It comes from ek (G1537), out or from, and agorázō (G59), to buy. To buy out of, redeem from. If something is in something else, then the separation from it is expressed with ek, out of, while if it is near it, on it, with it, then apó is used. If you would look at the Thayer definition it says; G1537 ἐκ, ἐξ ek ex ek, ex. It is a primary preposition denoting origin (the point whence motion or action proceeds), from, out (of place, time or cause; literally or figuratively; direct or remote).

So it would seem that if you are dealing with time as to its need to be redeemed, that means that time in and of itself has been taken captive[2] and is being utilized for another purpose; to redeem it you have to go back to the source from which time became, which of course is Gen 1:1-5; time was created for a specific reason and a specific purpose; the reason for which time in and of itself was created is quite clearly stated in Gen 1:26; man might be created in the Image and Likeness of God. It would also be good to link this particular thought to the New Testament for those who might think that the Old Testament is nothing more than a history book and not the foundation on which the New Testament is built. That means you have to go to Joh 1:1 In the beginning (in the beginning of what, would it not be time in and of itself) was the Word, and the Word was with God, and the Word was God; being that we have to take scripture in context with itself it says that in v:3 All things were made by him; and without him was not anything made that was made. When you refer to the Word of God, you are referring to the Bible; yes, I mean that Bible you have, probably on the shelf or on the table. So see the transition; In the beginning (of time) there was an entity that is called THE Word/God, that Word established the perimeters of what was being created, for v:4 In him was life; and the life was the light of men; as well as what it was being created for v:12 But as many as received him, to them gave He power to become the sons of God, even to them that believe on his name. It also defines the how of it; v:13 Which were born, not of blood, nor of the will of the flesh, nor of the will of man, but of God; as well as a product that it was to produce v:14 And the Word was made flesh, and dwelt among us, (and we beheld his glory, the glory as of the only begotten of the Father,) full of grace and truth.

Now remember we are still dealing with the redemption of time. The word redemption is the Greek word ek-agorázō. I have hyphenated it for clarity, ek as Thayer’s explain above is a primary preposition denoting origin whereas agorázō means to buy, to buy out of, redeem from. It means that we/humanity must go to the source of time which is of course God and make an expenditure of ourselves in order to redeem the time element that we are residing in (Col 1:27 To whom God would make known what is the riches of the glory of this mystery among the Gentiles; which is Christ in you, the hope of glory.) In other words we/humanity must reach into Eternity/God and pull that Eternity/God in to the element of time through the portal of man; in order for the redemption of it (time) to be redeemed. Rev 3:18 I counsel thee to buy of me gold tried in the fire, that thou mayest be rich; and white raiment, that thou mayest be clothed, and that the shame of thy nakedness do not appear; and anoint thine eyes with eyesalve, that thou mayest see. Time was created for a specific purpose (1Joh 3:1-2)[3], but that purpose was seemingly derailed, but in reality it was structured in such a way that God in the midst of time and by the end of time would be able to finish the creation of a man that would be timeless; Joh 1:14 And the Word was made flesh, and dwelt among us, (and we beheld his glory, the glory as of the only begotten of the Father,) full of grace and truth.

Well so much for time at this time.:-)

I want to share with you some of what has been happening here in Ethiopia. We arrived here on the 10th of January. As some of you might know or may not know, when we left Ethiopia in October of last year, God orchestrated our move in having us give up the house that we had been renting for a year; the lease was to be up in February of 2015. It was not too long after that that Nancy and I were both smitten with a bronchial infection of some sort that was by no means some little thing. We both were very much aware that it was the devil working to discourage us and to keep us from accomplishing that which the Lord had sent us here to do. So we both agreed in the spirit that we would not allow that to happen. We by His grace were able to keep all of our appointments and to do many of the things that needed our attention concerning the NGO; not only that but as of two days ago we had a break though in the Spirit and we both recognized the healing of God coming into our bodies.

The RBW-ETH in and of itself has grown as to the staff that is now employed by it. We have an Accountant, Secretary-Cashier, a Social worker, as well as Director, all of which are on salary as well as having the benefit of a pension fund. We have also been able to enlist the help of Bro Seife, as a consultant coordinator. It is a temporary position, but his input and collaboration has been a valuable asset to the ongoing development of RBW-ETH. Considering where we were last year as of August 2014, and the trouble that the devil was giving us in having a reorganization of the original proposal that the government required; taking us from 12 single parent homes to 75 children and their respective families, all of which I am saying at the time, “How can it possibly work out?” As you can see by the picture below, it is truly amazing what God has done to prosper this work. In the beginning of it we had 12 single parent homes and 3 widows that we were taking care of; today we have 75 children with their participating families and we will have 10 widows that will be sponsored and trained in some form of work to be able to provide for themselves. But most importantly we have an instant church/field in which to plant and water as God will give us the increase. When we were in Ethiopia in May/June of 2012, the Lord spoke to me very clearly and He said, “Go after the children.” It was out of that word that God began to open the doors to give us the opportunity to come now to the place that we are at. It is the size of the field that is a bit overwhelming and the need that is evident. It reminds me of the word that Jesus spoke Mat 9:36 But when he saw the multitudes, he was moved with compassion on them, because they fainted, and were scattered abroad, as sheep having no shepherd. So it would seem in such a situation as this v:37 Then saith he unto his disciples, The harvest truly is plenteous, but the labourers are few. Please pray with us, even as Jesus has instructed us to do; v:38 Pray ye therefore the Lord of the harvest, that he will send forth labourers into his harvest. 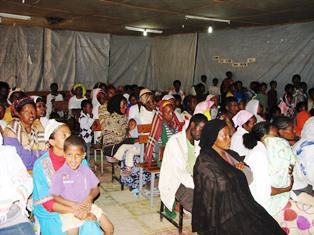 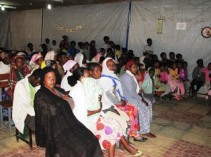 May God’s blessing be upon each and every one of you,
Bro Burt & Sister Nancy

PS: If any of you that are reading this letter are quickened by the Lord to sponsor a child or to help in any other way please contact us at info@rbwonline.org or reach us by phone at 224-612-2507.

[2] Rom 8:20 For the creature was made subject to vanity, not willingly, but by reason of him who hath subjected the same in hope.

[3]1Jn 3:1 Behold, what manner of love the Father hath bestowed upon us, that we should be called the sons of God: therefore the world knoweth us not, because it knew him not.

Posted by newhopeent on January 27, 2015 in Ethiopia